Happy, Happy Sunday Everyone! What a beautiful day it was to celebrate all the dad’s out there. Those that work or worked hard to provide for our/their families, today is your day! Today is also the  day we celebrate mom’s doing double duty. Keep up the amazing job your children if aren’t old enough to appreciate all you do soon will. Today we enjoyed family! My parents, brother and nephew joined us to enjoy an afternoon of great food, turtle searching, family pictures, boxing, weeding and just being a family that always has a silly, fun time. These are the moments I cherish! 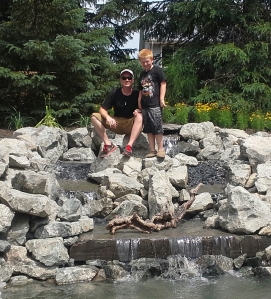 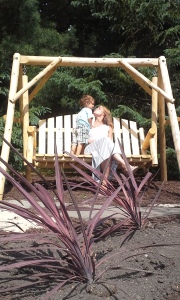 This morning S woke Joe to tell him how much fun she had at his friends yesterday…it was the first time her and K had been up later than 9p.m. It was 1145p.m. to be exact! YIKES! It was also their first time on a trampoline so they had a blast! They both slept until after 8 a.m. But were definitely still tired today! After they all made their way downstairs S and K set Joe up on the porch to have coffee and open his gifts…they were so excited! I will say they did a great job so great they had Joe in tears over the gifts. He was truly heart warmed by the thoughtfulness of the gifts. Besides the shorts and Polo they picked out the true gifts were homemade. One was a picture I mentioned I did with them about a month ago. Writing on their feet bottoms and photographing them. I found a great barn wood frame at the local flea market last week and used S’s first ever finger painting on foil to mat it! The second I used a template I found via Pinterest and interviewed S about Joe! K being two it was a bit too much just yet. I then put it into one of the frames I picked up at a garage sale and re-vamped! I so look forward to doing this in the upcoming years with both of them!

FINALLY, FINALLY I can say the waterfall and pond are complete! Landscaping and all!  Joe and the kids went first thing to get a few last plants and also picked up two Red Ear Slider Turtles!  S named her Cin-Da-Rella; I know imagine that! K named his Softie! Lol! 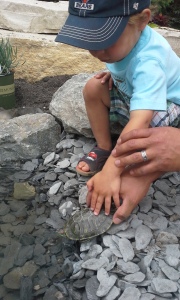 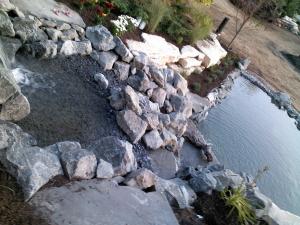 Now I need to back up as besides the crunch of getting the water feature complete by Joe my sister-in-law as mentioned is in town.  We had a really great time this week just enjoying the sunshine taking walks and playing outside.  They have also enjoyed dressing their Aunt Connie up or as they say taking her to their spa! S has mastered working all gates and locks as we’ll so sneaking down to visit her Aunt before she wakes has also been an exciting thing…not sure Connie loves but she is a champ about it all! 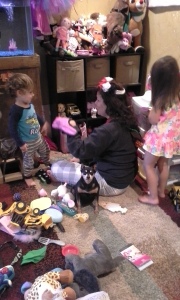 We had an opportunity to go to her families petting zoo too! S and K are animal fanatics so they were beyond excited!  I have to admit I got a bit excited too when we arrived and they had a two month old porcupine to hold!  I wanted to take that little guy appropriately named Chum Lee home with us! S wanted to take a kitten and K a Pygmy Goat or Lemur and honestly I would have agreed to all as I was in love with all three!! Then reality hit…I have a one and a half-year old German Shepherd, a five-year old Boston Terrier and an eleven year old Miniature Pinscher who we love and aren’t ready for more four-legged friends now:) 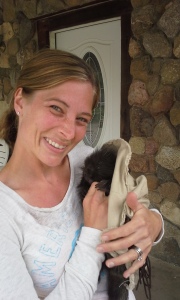 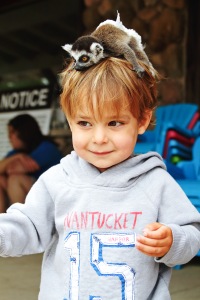 Well it’s off to get ready for another exciting week with these two crazy babies and hoping to get some furniture rehabbing done to share too!  So until next time be well!