Hello Everyone! Not sure if this is your kids, neighbors kids, nieces or nephews spring break week but it is for us! So far its been a beautiful week whether wise! It’s been in the 50’s/60’s all week. The only negative was earlier in the week MUD! Of course today we woke up to having been dumped on again by rain early this morning. But that’s ok we are going to get out and do something fun!
So far this week we have done ALOT of yard work. That little dozer K got for his birthday has come in pretty handy for having him haul the remnants of my cleaned up gardens! He loves to help or rather he loves to do work! S does as well helping me pull “weeds” which as we know aren’t out now but as long as she isn’t pulling my flowers out she can pull her heart away!

Joe has begun his changes to the yard this week as well.  We removed the previous owners swing set two years ago and we managed without last summer but this year with the kids getting a bit older it would be nice to have something here to keep us busy!   So we have ordered a new swing set.  With this being said we decided to remove our two apple tree’s along the fence line.  Normally I would be super bummed but these two were not producing apples that I could use to bake and the for a snack the production was far and few between.  I think the location of these two was just not good.  So we took both of these down and we put in some shrubs.  Our neighbors came over and said “Wow, how long will we get to have you guys as neighbors?”  As people think we have our own little compound over here.  As Joe says he just doesn’t like neighbors in his business.  If he wants you over he will invite you! LOL!  Plus, I agree when the pool goes in I don’t want neighbors able to see into my yard.  So call it what you want at the end of the day we like privacy.  The kids enjoyed helping dad out too! 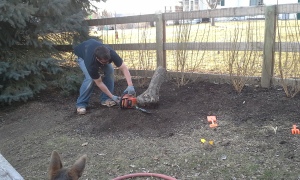 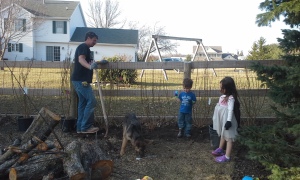 We also cut down a dead tree on the opposite side of the yard…well Joe did I enjoyed watching from inside!  After we had a fire with the kids.  They thought we were camping out!  We let them have dinner out sitting on a log while they watched the fire and then they were off on adventures around Joe’s shop as there are so many places to climb and look for bugs, etc. 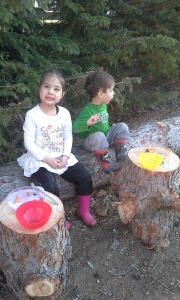 We went to lunch one afternoon with their great-uncle and my cousin (who is two) to Culver’s then after went over to the Tractor Supply shop as it’s baby chick, duck season!  The best free entertainment and they are so sweet to the kids there telling them about the babies!  I almost got myself sucked in to taking a few home!  I would love to have a few for egg purposes but we have a friend who has five hundred and he has been very generous in sharing with us; so I think I should maybe leave this to him!

Our last task for the week was getting the pond back in order.  This is really a process but it went rather smoothly.  Joe’s friend stopped over and helped which was great as then I could simply watch!!  Removing the fish was fun as our original Koi spawned last season which we thought was surprising as we had just got them last July.  I knew for sure we had a total of ten including babies.  So we started to empty the water and prepare the kiddie pool for them to live in while we got the pond cleaned for them. They will stay in the kiddie pool for roughly four days during this process.  As we transported them S counted and named each new one Joe took out!  We were at eight and the water was getting light when we then found two more.  Joe continued to skim and Joe found three more…THEN two more!  I had no idea we had this many and clearly Joe didn’t either!  Our Koi must have had many long weekends last year during season!  I’m so happy they all made it through the winter.  If you read my post from last year when Joe built the pond it was a self-taught project.  So all we have done with our pond has been learned from talking to the Koi pond we got our Koi from, online research, as well as talking to our local landscape yards!  The amount of algae and leaves in the pond was incredible!  Lesson learned we will purchase a net for this upcoming fall.  For now we have it cleaned and the falls are back up and running great!  The Koi will return to their sanctuary on Monday! 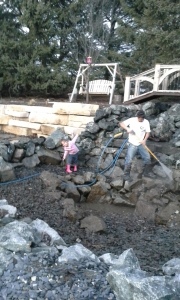 Last, I have realized I have failed to mention our newest addition to our home!  We have brought home a new puppy!  His name is DUKE!  He is a blue German Shepherd he is now seventeen weeks old and so far been a great addition to our home.  Nala our just two-year old shepherd cares for him like her child and argues with him like an annoying little brother so it’s working out great! 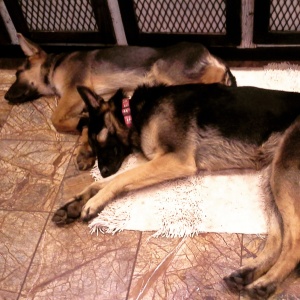 Today looks like it is going to be another beautiful day!  I wish you all a wonderful Easter and look forward to connecting soon!