Well my title is a struggle because I am a female so I don’t know the challenges of being called dad,daddy,pops,father.  But I do know the genuine joy that is felt by being called Mom!

I think fathers or at least many fathers challenges are those of being a superhero! Having a wife and kids expect things from you including financially, emotionally, and physically is different then being a mom.  I should mention I say this from my perspective.  As personally I know mothers that are the only superhero in their kids lives.  Those moms I applaud daily.  I don’t know how I would do all the things that two toddlers throw at me in a day alone! So to you moms who are both roles awesome job!!

To those dads that choose to not be active in their kids lives I’m so sorry for you.  Such a loss it is for you.  Missing seeing a child to show you all the joys their life brings including first steps to becoming an incredible baseball player.  There’s even those times when they need their dad to help them as challenges arise for them as being a kid at times can be rough.  A dad’s perspective is sometimes different from mom’s.  Frankly, dad sees things differently then our mom’s like sports or learning to ride your bike.  Maybe it’s that physical aspect.  No doubt those father’s that have chosen to be transparent in their children’s life I’m sorry!  If you are reading this there’s no better time than the present to make a change.

Those dad’s that are rocking this whole daddy thing or at least giving it their all; hats off to you!  I grew up with my dad in my life and yes I have memories with mom but I have very specific memories with my dad.  Him calling my sister and I his pumpkins after kissing us goodnight.  Or he and I dancing in our living room to The Allman Brothers Band on Friday nights!  That embarrassing nickname he gave me but deep down loved that I had.  Dad’s just are different in their relationships with their kids.  Joe may not have nicknames for our kids yet but he always kisses our kids goodnight no matter how late he gets in.  He once a week surprises them with a special note and a donut for breakfast.  It’s the little things that kids remember.  Celebrating dad is such a great day that many times seems like it’s pushed to the wayside.  Not celebrated as Mother’s Day is.  Don’t know exactly why but I hope those of you out there made yesterday extra special for the man your kids call dad or the man you call dad.  As mom’s always seem to cover the big stuff but dad gets the joy of celebrating the small moments they create!

I hope all you Father’s out there had a great day!  As a mom and daughter I thank you for all you do! 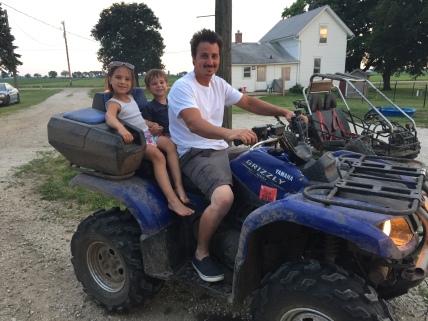 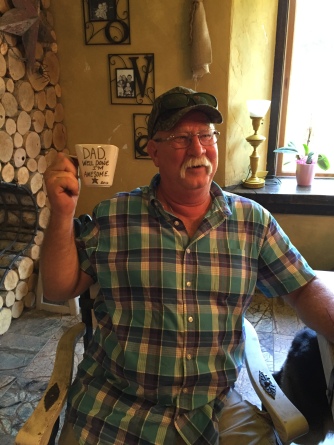 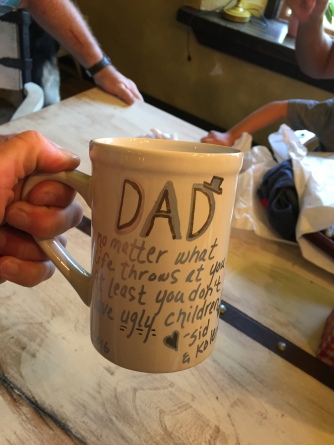 Hello Everyone!  Well per my last post it’s been crazy around here as furniture refinishing has been going on daily.  But I actually have been doing other things!  COOKING!  I know, I know we all cook but due to the fact that I have let grocery shopping get away from me I’ve had to get resourceful.  By this I mean open the fridge and pantry and work with what you have!

First up I’m sharing my newest and favorite addiction making my own bread!  I had a great conversation with my uncle a few months ago.  He shared that he was making his own bread!  I was intrigued as I’ve always had an interest in this but one I don’t own a bread maker and two kneading is a pain the you know what!  So first things first he said there are no machines and no kneading!  WHAT?!  He now had my attention and supplies for the basic recipe are minimal.  He shared with me the Jim Lahey method of bread making.  So I borrowed the book he had given to my mom and read.  I couldn’t wait to try it out.  Problem was I didn’t have a cast iron pot…hmmmm!  Mom always has the necessary supplies for my random needs.  She finally said I could borrow hers as long as I returned it! My first go at it I burned the bread but out of curiosity I cut it in half.  It was super soft and delicious.  So I didn’t give up I prepped my next loaf.  Using bread flour, active yeast, salt and water you drop it all in a bowl give it a quick mix and cover it.  Now’s the trick WAITING & WAITING & WAITING some more.  EIGHTEEN hours to be exact.  Which I just set my phone timer.  Then you remove it and place it onto a floured cloth (lint free) form the dough by tucking then cover it for two hours.  Thirty minutes prior to this rise completing you start the oven once ready you warm your cast iron pot then it’s time to bake the bread!  Here’s the quick part!! Thirty minutes with lid on then they say twenty-thirty lid off.  This is where I had my issue, my oven runs very hot so for me six minutes with the lid off is perfect!  I’ve now made fives loaves and looking forward to my next one being with kalamata olives!  Would eventually like to do as my uncle not purchase store bought bread and use all homemade.  As the cost is minimal and really it takes no time just patience.  So if you are considering baking your own bread I strongly recommend the Jim Lahey No Knead Method!! 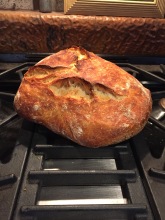 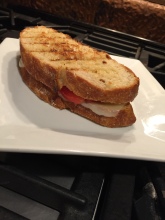 Next is these delicious little breakfast muffins that were all gone within 24 hours of making!  If that says anything for how they taste I suggest you get in the pantry.  This recipe was one I found on pinterest the only problem I had was I was out of milk.  So what does one do?  Well I grabbed the heavy whipping cream I mean heavy whipping cream makes everything delicious if you ask me!  I also used whole wheat flour as to white flour. Then I started not paying attention to the recipe just the ingredients (which I never do being a baker).  Putting all ingredients in and mixing.  It seemed thick and lumpy like cookie dough.  Hmm didn’t expect that!  Oh well three scoops per muffin and into the oven they went.  Out came some delicious cinnamon and sugar muffins!  I hadn’t even put the topping on yet and they were great!  once I rolled them in some butter and cinnamon and sugar mixture they went from great to phenomenal!  I typically don’t recommend many substitutes who am I kidding lately I’m substituting up the wahzoo!

Next is a great little dinner that everyone enjoyed!  I had a breast and a half of chicken left from the three pack I purchased and had no idea what I was going to do with it.  Then I remembered I wanted to try these mini pot pies.  I boiled the chicken while the kids ate breakfast.  Then shredded it put in a bowl and put in the fridge.  Grabbed the bag of frozen vegetables out and put them in the sink to thaw.  We ran out the door doing the days plans.  Several hours later we got home and I grabbed the crescent rolls out of the fridge, the now thawed veggies and shredded chicken.  Then I looked at the recipe…once again crap I didn’t have any garlic and herb soup?!  Never had seen it to be honest.  So cream of chicken it was and I added a pinch of garlic salt, pepper, and I believe Italian seasoning a pinch of that mixed with chicken, thawed veggies viola I had my pot pie insides!  Rolled out the crescent rolls placed them in the muffin tins.  Which I’ll be honest the crescent rolls didn’t work so great so I ended up using a roll of pizza dough I had.  I know random but I had it and thought why not.  That worked much better!  Stuck them in the oven and once ready added a sprinkle of pepper and served.  I ended up having six extras to put in the fridge and ten that I bagged and froze.  I have no idea how they will be when I defrost so stay tuned.  The important thing here was the KIDS loved them.  I think because they were just their size.  S is on a broccoli kick too so she was happy they were loaded with this!  I will also say I likely would not have this much left over but Joe wasn’t home for dinner hence the abundance left over!

Ok so there are my food shares for this week!  If you have done any great recipes lately please share as I love to try new things!  Another thing to remember just because you are out of one of the ingredients doesn’t mean you can’t make it.  Get creative I always say the pizza delivery never messes up if it comes out horrific!

Have a great rest of your day!  Cheers!