So as I mentioned in my last post I was just up visiting my in-laws!  We had a great trip as all family vacations were put on hold so far this year so the kids were so ready to get away as was I.  Joe spent the week in Canada with his brothers.  So maybe not technically a family vacation but we all got a much needed break!  My in-laws at the beginning of the year decided to forego being snow birds and try their wings out in the north woods year round!  I don’t think my mother-in-law intended it to happen so quick but the house sold in the first day!  We on the other hand are so happy to have them closer to us as the kids are getting bigger and they adore all their grandma’s and papa’s in different ways.  Let me quick give you insight on my in-laws then we will get on with it!  My mother-in-law is a beautiful women she will literally give the shirt off her back for her loved ones.  She adores those in her life and is a great support to all her kids.  They all are entrepreneurs in some way or another and pushes them to go after their dreams and passions.  She has been very supportive and pushed me to blog and grow my mom and I’s furniture business.  My father-in-law is just as passionate as my MIL but he also has to have all the facts before moving on his passions.  There is no jumping head first into anything.  My brother-in-law provided him with the nickname “bing” yes like the search engine!  He is a wealth of knowledge and if he doesn’t know he will research the subject and get back to you!  He has a silly sense of humor which I know first hand can help in stressful situations.  So with this bit of insight let’s talk home makeovers!  My MIL said go with whatever you want I know I will love!  My FIL said let’s discuss your thoughts as I deserve a say in what you do to my home!  Which honestly I was and am completely ok with as I wanted him to be happy when I left their home with what I did.

First project up was the kitchen.  My MIL wanted to re-do it but buying all new was not in the budget right now.  So she wanted to paint the cabinets which I thought was great!  She was excited so she got them all done before I arrived.  I suggested going two tone as it seems to be very popular and grey on bottom and white on top I love!  She did just this but called and said “I’m not sold on how this looks!”  I said “leave it until I get there.”  She did and when I arrived in looking at the space I knew exactly why she didn’t love the grey was looking blue as she had a lot of blue details between the kitchen and living room which are open to each other.  Her countertops were grey and I think had a hint of blue in it and there was wallpaper on one wall with little blue flowers.  The grey lost it’s power to all the blue and was looking blue itself.  I then noticed little wood painted pieces behind her sink on the wall.  I asked what this was about.  She said she just put them up as the water kept getting up there and looked terrible so she just added this.  I liked it ALOT but we had to do more.  Her two over the oven cabinets were the ones with glass insets but her’s were very out-dated.  So I knew this too needed to be changed.  Last she had asked before I came up to re-do her dining room table which was too dated so needed to freshen up.  Lastly, they had a space where their dishwasher was but had to be removed so it was just being covered with a curtain; I had to figure out how to make this more-useable and easier on the eye.  So I sat down and came up with a plan!

For the backsplash we would run with my MIL’s idea but we would stagger and stack the wood which hold your seat the wood was shim’s!  Yes, the packs you buy to level stuff out!  They were perfect size and with the layout only required a few cuts.  Which I’m thankful for as my FIL didn’t have ANY power tools; I’ve noted this for my next visit😁!  We went through I believe it was 14 packs of shims at $1.69 a pack so $23.66 and we painted them with white, grey and brown acrylic paints which we had.  To adhere the sticks to the wall I used E6000  which was $6.99 at Wal-Mart which is currently a favorite and Elmer’s wood glue which my MIL had on hand.  I used the wood glue on most of the project put on the few tricky spots I needed the power of the ES6000!  When it was completed I used spray adhesive to just give a final touch of hold.  I doubt I needed this but when I first did them they weren’t laying as flat as I wanted but by morning they were.  So if you go this route know as long as you put glue on all parts you want to lay give it time.  I also was ok with some being a bit raised as I wanted dimension.  So the backsplash cost a total of $30.65 and some change! 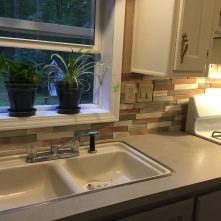 Next was the dated glass on two cabinets these I wanted to pull the grey and white together.  We went to the local tile store and purchased three stone and glass tile mosaic back splashes.  This was probably the biggest expense at $14.99 each we spent $44.97.   I truly think the end result is worth every penny!  These too I adhered to the glass using the E6000! 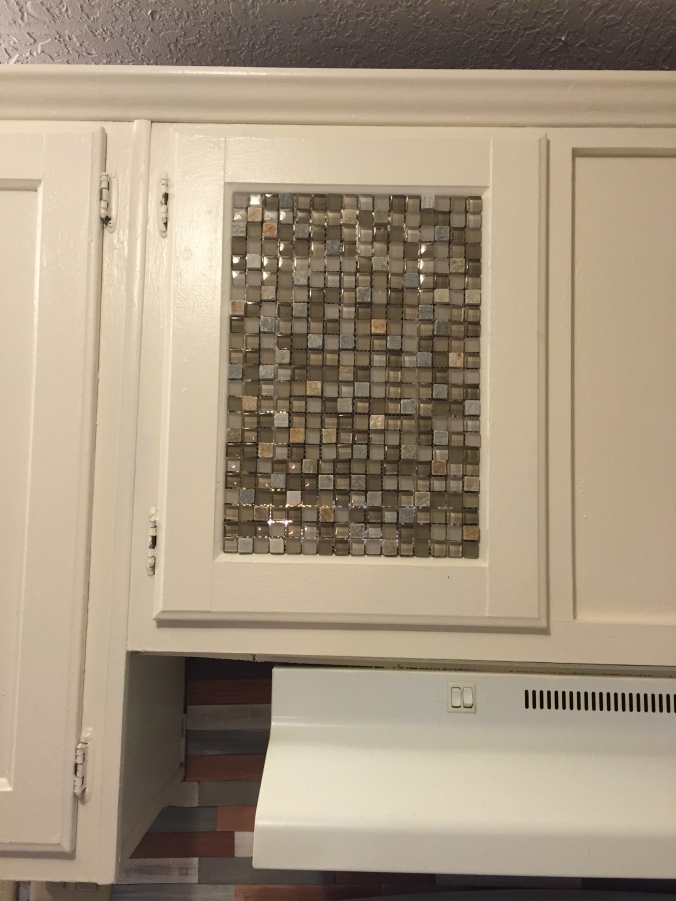 Where they removed their old dishwasher they had hung a curtain and placed an old microwave cart inside.  It just didn’t flow but I understand the reason behind!  So we had my FIL cut some pieces of trim to pull the area together.  Remember NO POWER TOOLS! We pulled the cart forward to be flush with the other cabinet and painted it to match the cabinets.  Then I suggested getting baskets for storage in the space.  I love how this quick fix came together costing $0!

Next was the dining room table!  There was absolutely nothing wrong with the table it just needed someone to give it life again and bring it in to 2016!  So I painted it with the grey Rustoleum chalk paint.  Then I used spray polyurethane on it doing two coats as the first one was showing the sweeping motion I did too much.  Then after 24 hours we ate at the table and I realized some grease or oil was either pulling through as I did not KILZ the table first.  Or a piece of dinner sat and soaked into the paint.  What’s a girl to do?  WHITE WASH!  So I white washed the top and honestly I like it better than pre white washing!  We went to the fabric shop and picked up two yards of this fantastic fabric and my MIL attached it to the seat cushions.  With the bit she had left over I suggested place mats to bring in the cushions a bit more!  She loved the idea and happen to have two extra place mats so she adhered them with the spray adhesive and viola!  For $33 in fabric (which was costly but when in a small town is expected) and use of the $6 spray adhesive the results are amazing!  Total project was $39! 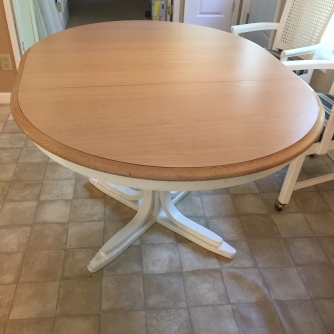 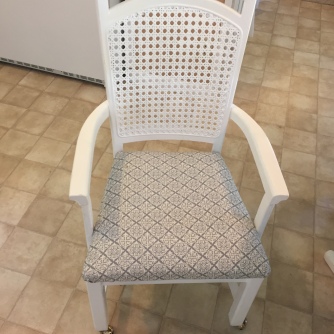 One other project my MIL was really interested in having me do was re-finishing a hutch as she needed more storage.  Well we had to go out and wheel and deal a bit to get the hutch she had her eye on.  The gentleman wanted $125 and I walked away with it for $75.  I would have liked to get it for $50 but my in-laws were very happy with the price so we ran with it.  I used the eggshell latex paint they had and I brought up my Annie Sloan clear and dark waxes as I knew she wanted me to wax something!  For $75 they now have a fantastic hutch for additional storage and a great new piece for their home!

So day one was complete and when my in-laws arrived home my mother-in-law was in tears she was so happy!  Yes the table was a two day process but the main coat was on!  I have to say I too was really happy with the results!  She then said ok where can I take the kids tomorrow and what else do I need re-done!  I laughed and said well I was thinking your guest bathroom needs me!  She said ok what do you think?  I said nothing crazy but remove wallpaper trim, paint, refinish existing storage, remove large rack shelf unit and put up new decor!  She said ok I’m in!  My FIL said “well can I please have a say in the color?” I said sure so he went online and looked up shades of yep you guessed it!  BLUE! LOL!  I suggested robins egg and he was in agreement but then we got to the store.  We ended up going with an aqua as it just felt right.  They needed some brighter colors and the bathroom seemed like the place to provide that and aqua works well in bathrooms; I think! My mother in law let me run with it.  We removed the large over the toilet rack, towel rods, etc.  I went in there and got to work taping and painting.  The color at first had me nervous as it was aqua!  But I felt once we had pictures, wall hangings and cabinet back in it would come together.  I believe the paint was $20 and everything else we found around the house.  For $20 I’m very happy with the results! 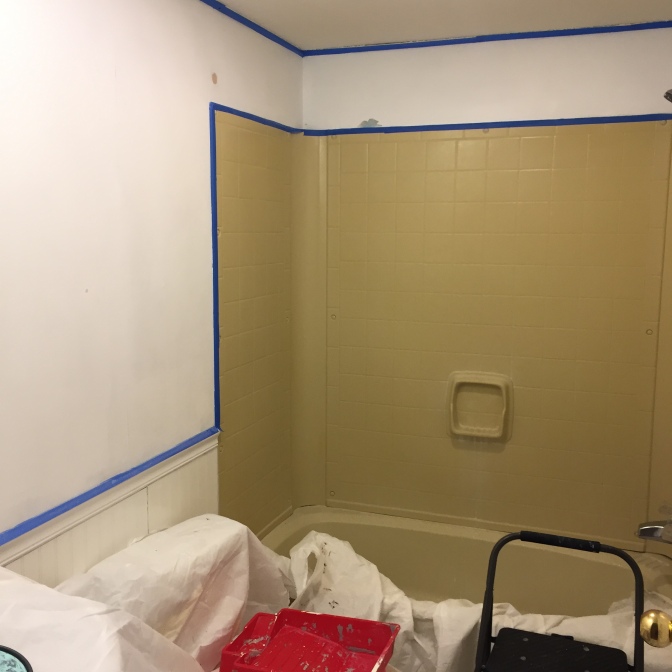 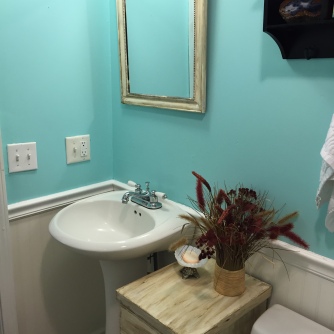 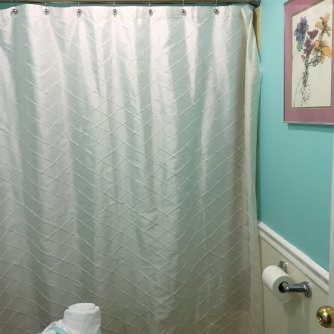 One BIG thing I failed to mention at the start of this project.  This home is a permanent mobile home.  What that means…it’s not on wheels, it has a basement, it’s not going anywhere.  The problem is those that built it didn’t use the highest quality and many of the walls are not perfect.  My in-laws have spent money to re-do many of the walls and ceilings.  There is one wall the kitchen back splash wall that is not perfect hence the use of wall paper.  I had no idea until I started working on it.  The bathroom walls to were a challenge but I think the end result covers any dominant flaws and both spaces have a fresh new look.  As my mother in law was feeling less than excited about living here full time, with so much not “done”.  I felt like if we re-did some spaces she would grow to love this house and accept it as her home.  I think we accomplished this.  I will mention she is on the hunt for a new dining room chandelier and we are working on two additional rooms via phone direction!  Understanding that home renovations are not cheap and sure there are still things they want to up date including the shower and actual cabinets but until the time is right I think we brought life to their spaces!